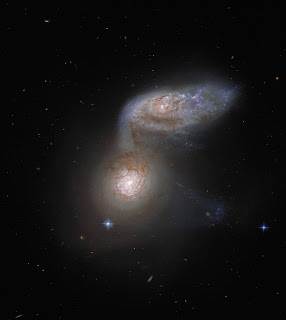 The merging of two galaxies, such a phenomenon may be a common phenomenon in the Universe, but it is not common to us.  We have not witnessed such an incident, and there is hardly a reason why we are curious about it. It takes millions of years for two galaxies to collide, and this is probably the reason why it is not possible for us to see the collision of two galaxies with each other.

Arp 91 is more than 100 million light-years from Earth, NGC 5953, NGC 5954 galaxies form a galactic dance scene, Arp 91 can be identified in such a way that what looks like a bright spot is NGC 5953, and to the upper right is the oval-shaped galaxy NGC 5954.  Although these are both spiral galaxies, their sizes appear very different when viewed from Earth.

The gravitational force of the two galaxies is responsible for the interaction, as the extreme gravitational attraction is causing them to interact, although gravitational interactions between galaxies are common, and an important part of galactic evolution.  Most astronomers believe that another type of galaxy is formed due to a collision between two spiral galaxies, but extremely energetic and massive collisions occur at times where human life is not enough. that it takes millions of years for the action to take place, and that is not the age of human beings.

Events that take place over hundreds of millions of years cannot make us expect Arp 91 to look any different during and after our lifetimes.