Three such supermassive black holes have been discovered, which are merging with time. 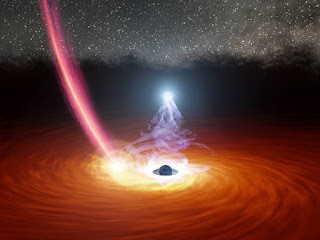 Researchers have discovered three such supermassive black holes in the Universe, which are merging over time, the researchers believe, this event can lead to the formation of a triple active galactic nucleus. The new discovery has revealed that the compact region at the center of a galaxy, which is radiating a greater amount of luminosity than normal, means that there are no supermassive black holes.

A team of researchers from the Indian Institute of Astrophysics including Jyoti Yadav, Moushumi Das and Sudhanshu Barve, along with François Combs from the Collge de France, Chre Galaxies et Cosmology, Paris, studied a pair of known interacting galaxies, NGC 7733 and NGC 7734. While studying, the team discovered that there is an unusual emission from the center of NGC7734 and a large, bright cluster along the northern arm of NGC7733. When the team of researchers examined the galaxy cluster NGC7733, they discovered that a small  The Milky Way, which is moving at a different speed than NGC7733.  This shows that the group is a small galaxy called NGC7733, its researchers named NGC7733N.

The UV and H-alpha images also support the presence of a third galaxy, which could have been formed by the merger of NGC 7733N with a larger galaxy. According to the researchers, each galaxy harbors an active supermassive black hole at its core, forming a very rare triple AGN system.

The presence of a third black hole could solve this problem, DST says, that the two merging black holes can transfer their energy to the third black hole, and at the same time merge into each other.  Researchers have detected several AGN pairs in the past, but triple AGNs are extremely rare for researchers, with only a few detected before using X-ray observations. The IIA team expects the latter, these triple AGN systems to be more common.