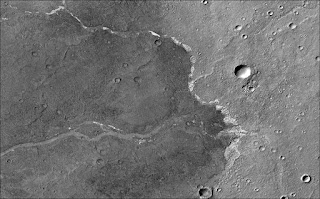 From the discovery made on Mars, it is known that in the future where rivers, ponds will be living.  It was previously estimated that the water on Mars evaporated about 3 years ago, but a study of the data deposited by the MRO on Mars over the past 15 years shows that there are indications of liquid water from Mars in the recent past.  2 billion to 2.5 billion years ago, this means that the water flowed, a billion years longer than previous estimates.

On Mars, Caltech researchers used the Reconnaissance Orbiter to determine whether water on the surface of Mars had, in fact, left behind salt minerals as recently as 2 billion years ago.  Data collected from Mars suggest that rivers and ponds on Mars may have been rippled billions of years ago, providing a potential habitat for microbial life.
The discovery of salt confirms that there may have been liquid water on Mars, with salt being the first mineral to provide evidence of the presence of liquid water in deposits.  The new discovery raises many questions about how long a microbial could survive on Mars, if it ever formed.
Study lead author Ellen Lisk and Professor Bethany Ehlmann used data from an MRO instrument called the Compact Reconnaissance Imaging Spectrometer for Mars (CRISM) to map chloride salts in the soil-rich highlands of Mars’ southern hemisphere.  The fewer craters the area has, the smaller it is, scientists can estimate their age by counting the number of craters on an area of ​​the surface.
The Mars Reconnaissance Orbiter (MRO) was launched on 12 August 2005, and reached Mars orbit on 10 March 2006. The MRO consists of two cameras designed for the purpose of mapping and zooming in on Mars.  Characteristics of these two cameras, the Context Camera, with its black-and-white wide-angle lens, helps scientists map the extent of chloride.  Where scientists need to zoom in on Mars, scientists turn to the High-Resolution Imaging Science Experiment (HiRISE) color camera, which lets them see details as small as the Mars rover from space.
When Lisk and Ehlman created digital elevation maps of Mars, using both cameras, they found that many of the salts were in depressions, and on volcanic plains sloping to shallow ponds.  Counting craters at the top of the volcanic area and evidence of salt allowed scientists to date their deposits.
While the MRO has inspired new discoveries about the nature and timing of ancient salt ponds associated with the river, says Ehlmann, CRISM’s deputy principal, his co-author, Lisk, now post-mortem at Johns Hopkins University’s Laboratory of Applied Physics  doctoral researcher, who leads CRISM.