Hubble has observed the collision of two galaxies, which is known as Arp 143. 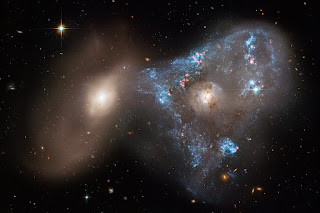 The Hubble Telescope has detected the collision of two galaxies, in which there is a space triangle, forming Arp 143, in this pair of galaxies the bright, star-forming spiral galaxy NGC 2445 is on the right, and the less fascinating and less spectacular NGC 2445 on the left. With fewer stars is NGC 2444. When two galaxies pass each other, their chances of a collision increase, such a collision can be seen as an interacting pair.

Regarding the NGC 2445 galaxy, researchers suggest that NGC 2445 contains a newborn star, which ignited a distinctively shaped firestorm of formation, including thousands that are in their final stages, and that this galaxy is filled with new stars. Because there is a lot of gas in it, which is responsible for the formation of new stars.  NGC 2445 could not escape the effects of its companion NGC 2444’s gravity, And the gravity of NGC 2444 is pulling the gas of NGC 2445 towards itself.

NGC 2444’s gravity pulls gas from its companion NGC 2445, then it forms a bridge, this bridge filled with youth, excites streamers of blue stars.  The streamers are the first of what appears to be a wave of star formation, which began at the outskirts of the Milky Way, and continues inward.

Researchers estimate that streamer stars were born 50 million to 100 million years ago, but these baby stars are being left behind as NGC 2445 slowly moves away from NGC 2444 over time. Due to gravity, NGC 2444 has spread into an odd shape, due to which it has become very distant.

Hubble has uncovered an interesting feature, in addition to star formation in NGC 2445, that the bright core of a starburst galaxy may contain dark filaments of gas, which create features that may have resulted from the explosion. Finders have revealed a powerful source in the core from radio observations that could lead to future explosions, and may have been produced by a black hole from rapid star formation or material flowing into the center.

Star formation in the cores of galaxies is not unusual, as gas rich in galactic encounters flows into the center of the galaxy, which can trigger the birth of new stars, the stars ejecting outflow material. NGC 2444 would have exploded in the stars forming at the center of the galaxy, and the dust from these explosions obscured the galaxy’s core and other regions, making it difficult for Hubble to study in visible light.