TRAPPIST-1 There are 7 planets in the Solar System, out of which 5 are the size of Earth. 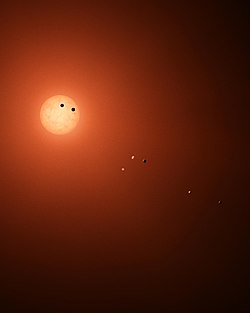 TRAPPIST-1 is a supercool dwarf star located in the region of the constellation Aquarius, it is slightly larger than the planet Jupiter in our solar system and cooler than our Sun, and less than 10% its size, it is about 39.5 light-years away from the Sun. Five years after the first discovery, the planets of TRAPPIST-1 are still enigmatic, with researchers’ studies showing that the solar system of TRAPPIST-1 may be almost twice as old as our solar system.

Sean Carey, manager of the Exoplanet Science Institute at NASA’s Jet Propulsion Laboratory in Southern California, who was part of the team that helped find some of TRAPPIST-1’s planets using data from the Spitzer Space Telescope, says Carey,  People have been able to ask the question, whether a planet around another star is habitable.  The researchers found that the planetary system of the TRAPPIST-1 star consists of seven terrestrial planets, five (b, c, e, f, g) that are similar in size to Earth, and two (d, h) of Mars (whose diameter  is about half that of Earth) and are between the size of Earth.

The Hubble Space Telescope added more information about TRAPPIST-1’s potential to be habitable, of which at least three planets—d, e, and f—do not have the puffy, hydrogen-dominated atmospheres of gas giants,  However, Hubble does not have the power to determine whether the planets have potentially habitable atmospheres.

The Webb telescope, which was launched by NASA and ESA on December 2021, will investigate the planets of Webb TRAPPIST-1, the fourth planet from Webb’s main target star, called TRAPPIST-1e. Scientists consider TRAPPIST-1e to be the habitable zone, because it lies in the Earth-like zone of life, also known as the Goldilocks zone, the Goldilocks orbital distance of a star where liquid water is found on a planet’s surface,  just the right amount of heating to allow.

What makes a planet habitable, if anything, is its atmosphere, how important the atmosphere is for a planet, they can be understood from the atmosphere of the Earth. The researchers expect to get only a partial indication from Webb, especially in their initial observations, as to whether any atmospheres exist.

Lewis is part of the science team that will observe the sky in infrared light using the Webb telescope, says Lewis, who needs to watch TRAPPIST-1e’s atmosphere as it falls into the Goldilocks perch in the habitable zone. Lewis goes on to say, that we expect, that we see carbon dioxide, a really strong feature, at wavelengths [detectable by the web]. Once we know where the little things that rise above the noise are, we can go back and see a lot more resolution in that area.

To try to deduce their possible composition, Lewis says, they should use computer models to construct possible planetary environments, as these may prove to be important options for understanding the TRAPPIST-1 planets. The great thing about the TRAPPIST system, says Lewis, is that it allows us to refine those models in any way they want, whether they’ll just become barren reefs, or potentially habitable worlds.