Hubble observed the energetic explosion of a newborn star. 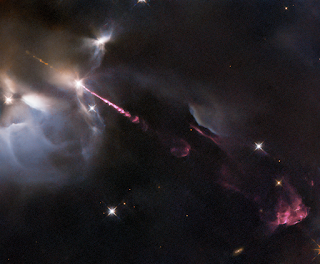 The NASA/ESA Hubble Space Telescope observed the energetic explosion of a newborn star, which occurs when the stellar system – gas formed from a young star in its early stages of formation – collides with objects around the star at supersonic speeds , and this collision causes it to glow. In fact, the gas formed from the young star is an incandescent jet, in which the collision of material and gas causes the jets to heat up, which appears to be energetic explosions, as well as form the colorful, faint structures that astronomer Herbig-Haro has described. objects, billing in the lower right of this image.

The Herbig-Haro object of HH 34 was captured in spectacular detail by Hubble, first in 1994, a second time in 2007, and again in 2015, the researchers say, showing that the Herbig-Haro objects evolved and became important in just a few years. been seen to be changing. HH 34 is present in the Orion Nebula, about 1,250 light-years from Earth, a large region of star formation that is visible to the unaided eye.

In the future, the Webb telescope will help researchers understand HH 34; the Webb telescope’s Wide Field Camera 3 will examine the 4 jets of bright jets that Hubble has in a set of observations. Webb will observe at those infrared wavelengths, and will be able to peek into the dusty envelope surrounding the still-forming protostar, Webb will revolutionize the study of the jets of young stars. The data from Hubble’s observations of HH 34 will help astronomers interpret future observations with Webb.