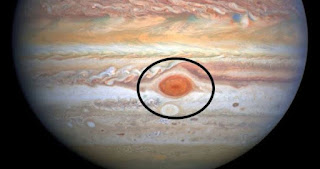 Jupiter is the largest planet in the solar system, which is a giant gas planet, it contains a lot of hydrogen and helium, most of it is in the gaseous state. Jupiter’s mass is 317 times that of Earth, scientists say, it hardly has a rocky core, but much of its radius is taken up by metallic hydrogen, liquid hydrogen, and layers of its atmosphere.

Researchers say that if Jupiter had the same density as Earth, then its radius would be 7 times greater than that of Earth, but in reality Jupiter’s radius is 11 times greater than Earth.  Jupiter is a recognizable presence of the Solar System, as it is the only planet in the Solar System whose surface atmosphere is clearly divided into turbulent bands, below its equator is the Great Red Spot, which looks like a red eye,

The Great Red Spot is an anticyclone, which revolves around a center of high atmospheric pressure, if such a storm forms on Earth, it will move in the opposite direction than Earth’s storms.

The Great Red Spot, seen on Jupiter, is the largest storm in the Solar System, which is larger than Earth, with winds blowing in it hundreds of miles per hour.  The Great Red Spot was observed in 1665;  Researchers estimate that the Great Red Spot has been raging for more than 350 years, with a diameter estimated to be about 56,000 km in the late 1800s, but in 2017 NASA reported an average width of 16,000 km, the researchers said.  That is to say, the Great Red Spot is gradually shrinking over time.

Hubble detected a new storm in 2020 from its snapshot, which scientists call a cousin of the Great Red Spot, which changed its color.  The planet is also observed by Hubble in multiple wavelengths, to give researchers insight into the height and distribution of the planet’s haze and particles, to complement visible-light imagery, which captures ever-changing cloud patterns.  it shows. Hubble is exploring the Jupiter archive to learn more about Jupiter.